PEX is a cross-linked polyethylene that is formed into tubing. Due to high prices of copper, synthetic materials are now being preferred, an example is for PEX plumbing. This kind of plumbing system has over years gained popularity due to its use and flexibility of fitting. Furthermore, PEX is advantageous in that it can flexibly bend around corners as compared to copper and polyvinyl chloride piping. Hence making PEX easier and quick to install. On the other hand, research has shown that PEX is associated with much failures compared to copper and PVC plumbing systems. Among the failures is the occurrence of fitting failures water leakages that causes great damage. This article therefore will discuss the failures of PEX by giving its history, use, production process and the lawsuits that have been put across.

History and use of PEX plumbing

Cross-linked polyethylene (PEX) was originally invented in the 1950’s, (Bellis 2010) but improved by Dow Corning and Thomas Engel in the 1960’s. Originally, it was marketed to Europe as an alternative to copper in the heating and plumbing industries. In the United States, PEX has been used since the 1980’s for radiant heating systems, but has not been popular for potable water until the recent years

PEX can be produced using one of the three processes;

The first and most common is the Engel process. The Engel process relies on temperature and pressure along with peroxide to create the cross-linking during extrusion.  Tubing is produced using Peroxide where free radicals are created when HDPE polymer is melted and cross-links between molecules occur at temperatures that exceed the decomposition temperature of the polymer.

The Silane method is done by grafting a Silane molecule onto the polyethylene backbone and with the use of a catalyst, the piping is fed through an extruder. The cross-linking takes place by exposing the tubing to steam or hot water after extrusion.

Lastly, the electron beam method. Starts by extruding high density polyethylene. After extrusion, the tubing is taken to an electron beam assembly and exposed to a prescribed amount of radiation. The radiation emitted allows to break the existing links between molecules of the polymer and initiate cross-linking process. 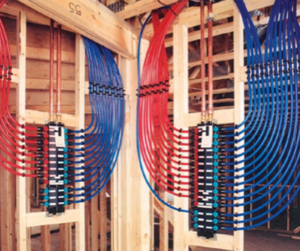 PEX plumbing system has been used for more years and therefore its failures has been observed and known. Its major failures is linked to piping and fitting. Piping fails when the pipes are exposed to chlorine that is within the water, exposure to direct sunlight before its installation. Furthermore PEX pipe is vulnerable when it comes in contact with such solutions as petroleum products and oxygen. It can leach toxic chemicals from pipe material also. On the other hand, fitting failure is caused by dezincification that results to corrosion and finally creating leaks. The various causes of PEX plumbing system failures are discussed at length.

Chlorination has direct effect on the lifespan and reliability of PEX plumbing system. When pipes get in contact with chlorine that is within the water, it causes PEX failure that will therefore cause leakages.

PEX is vulnerable to sunlight and hence degrades very fast. This means that tubing cannot be carried out where there is direct exposure to ultra-violet rays, hence forcing the plumber to store it away from sunlight before installation and much care from daylight after fixing it. Otherwise failure will be experienced due to loss of flexibility and elasticity. Therefore, PEX piping manufacturers fixes this failure by allowing only 6 months of exposure for PEX plumbing that has had ultraviolet stabilizer added during production.

According to manufacturers of PEX piping, it is a known fact that PEX is permeable to certain chemicals and oxygen. Although oxygen may not be considered as a major issue by most individuals, it is a problem in closed loop systems. In closed loop systems, often radiant flooring systems, oxygen can cause corrosion of the heating elements. Similarly, when PEX piping is used underground, the piping can come in contact with ground water. In most cases, this is not a problem. However, in areas where the ground water has been contaminated by petroleum products, the gasoline additive Methyl Tertiary Butyl Ether (MTBE), or pesticides, PEX piping can permeate these chemicals through the pipe and into the potable water thus contaminating the supply of water.

During the Engle process of producing PEX piping, chemical byproducts are often left behind in the pipe. The most prominent are Methyl Tertiary Butyl Ether (MTBE) and Tert-Butyl Alcohol (TBA). The amount these chemicals can leach into potable water is uncertain, but one test of AQUAPEX pipe, manufactured by Uponor Wirsbo, showed MTBE levels of 17 parts per billion (ppb) and TBA levels at 6900 ppb. Therefore the primary reason for leaching of chemicals from PEX is over-chlorination.

The possible solution therefore is to test water quality and determine whether PEX is suitable. Facts shows that water PH should be at or above 6.5 and chlorine concentration should be at or below 4.0 parts per million (ppml).

This process occurs with certain water chemistry, causing selective leaching of zinc from brass alloy and resulting in weakening of the fitting and leakages. To counter this problem, most PEX companies have already opted for a dezincification-resistant brass for their fittings. PPSU (poly alloy) PEX fittings can replace brass since they are not subject to this process and are widely available. Another method would be to use a “home-run” type system with continuous PEX pipe runs from a main manifold to the plumbing fixture, without any fittings or connections behind the walls. While this does not entirely exclude the possibility of dezincification of manifold and supply stop valves, it presents a safer alternative with better means of early problem detection and repair.

Due to the failures listed above, a civil lawsuit had been filed against AQUAPEX. Majorly for piping leaching chemicals into the potable water and class action lawsuits against Zurn and Kitec in regards to their respective PEX products for the dezincification of brass fittings. Discussed below are two resolved lawsuits that involve the piping and the fittings of PEX plumbing systems.

With PEX, there is limited adhesives for pipe insulation that makes pipes to prematurely get damaged due to its detrimental effects. Therefore a plumber should opt for other insulating materials such as conventional form wrap insulation with no effects.

While very few lawsuits have emerged dealing with the PEX piping, one major lawsuit in Arizona deals with chemical leaching. For instance, with AQUAPEX plumbing pipes, they cause water to have a bad taste hence could result to health risks due to contamination.

It is expensive to fit PEX, especially the compression ones other than copper PEX. Since it is flexible for plumbing, then it generally require few fittings which seem to incur higher cost per fitting.

Most lawsuits dealing with PEX piping deal with the dezincification of the fittings. Zurn and Kitec, manufacturers of brass fittings for PEX piping. They have been involved with lawsuits dealing with dezincification of brass fittings. The Kitec fittings therefore are still sold and used without major incidents. Hence, it is still considered the common PEX fitting.

If PEX is to be used, one has to consider the potential of health risks. If PEX is to be used for portable water for instance, PEX piping should be done in soil that contains petroleum to minimize corrosion of the PEX, hence making water less contaminated. Furthermore, prevention is better than cure. One must consider asking the seller or someone who has used PEX plumbing system before if they have ever had any water problem. Lastly, one has to be aware of fitting problems. Therefore you should consult if previous fittings have failed, may be due to PEX lifetime or blockage. The owner should consider choosing a trustworthy installer that will ensure that it won’t fail if exposed to sunlight.

From the failures discussed above, water flowing through PEX could be harmful for human consumption since it might contain toxics. Therefore, choice to consider using PEX plumbing system should be at the owner’s risk even though it’s cheap.

Find Out The Costs